The word beginning is a noun. It means the point in time or space at which something starts.

Each of us has experienced new beginnings in our lives. Graduation season could be one of them. A marriage, birth of a child, a new job, or retirement all of these events have created opportunities for a new beginning.

I reflect on the big moments that sent me down a new road and I smile. They are good memories filled with a promise of something new and exciting.

When I saw this sign, I thought about the offenders arriving at Angola. Offenders have been arriving since 1880. The offenders were housed in slave quarters and worked the plantation. In 1901, Louisiana took over the prison. The road that I am driving on to enter Angola is most definitely the road that the offenders from past years traveled down to start a new beginning. There is only one road to Angola prison.

I am not sure when this sign was placed on this green, grassy mound. But I wonder if the offenders back in the day thought of this as “The Land of New Beginnings.” Everyone here has a unique story, but the same setting: Angola Prison. They may not even notice this sign. On the road to Angola, I imagine the offenders feel scared, alone, and angry, but time has a way of changing things.

What I think I know about “New Beginnings”:

Being given a sentence to Angola Prison may seem like “The End” not a “New Beginning”.  I can’t speak for all 5000 offenders currently living at Angola Prison. I can only speak about what I know. I know that there are educational opportunities to earn your GED, certifications, and degrees. There are opportunities to work, tutor, and become a trustee.

Perspective is everything. Even for the offenders arriving at  Angola. Many offenders have taken this opportunity as a “New Beginning”. Working with the programs offered by the Department of Corrections, offenders are able to let go of past mistakes. For the offenders that signed up for the Braille Transcribing course, it is an opportunity to learn something new.  An opportunity to give back to their community in a very unique way. Most of all it gives them a fresh look at the future possibilities.

The “Beginning” is the most important part of the work. I agree with Plato. We all have to start somewhere and give it great importance. I’m proud of the partnership with Angola and the Department of Corrections. One might say it is a “New Beginning” for us both.

“The beginning is the most important part of the work.”      ~Plato 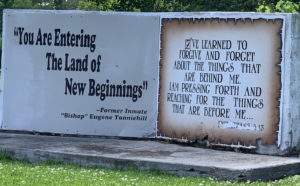 Angola: Community “Yes or No”?